Track Review: Dodge Challenger SRT Hellcat Named after the iconic WWII Grumman F6F fighter plane, the Dodge version drove up before me in the parking lot of the Monticello Motor Club producing as much anticipation as I might imagine getting if the real “ace-maker” fighter had appeared.  Although I’ve not yet flown a 2,000 hp […] 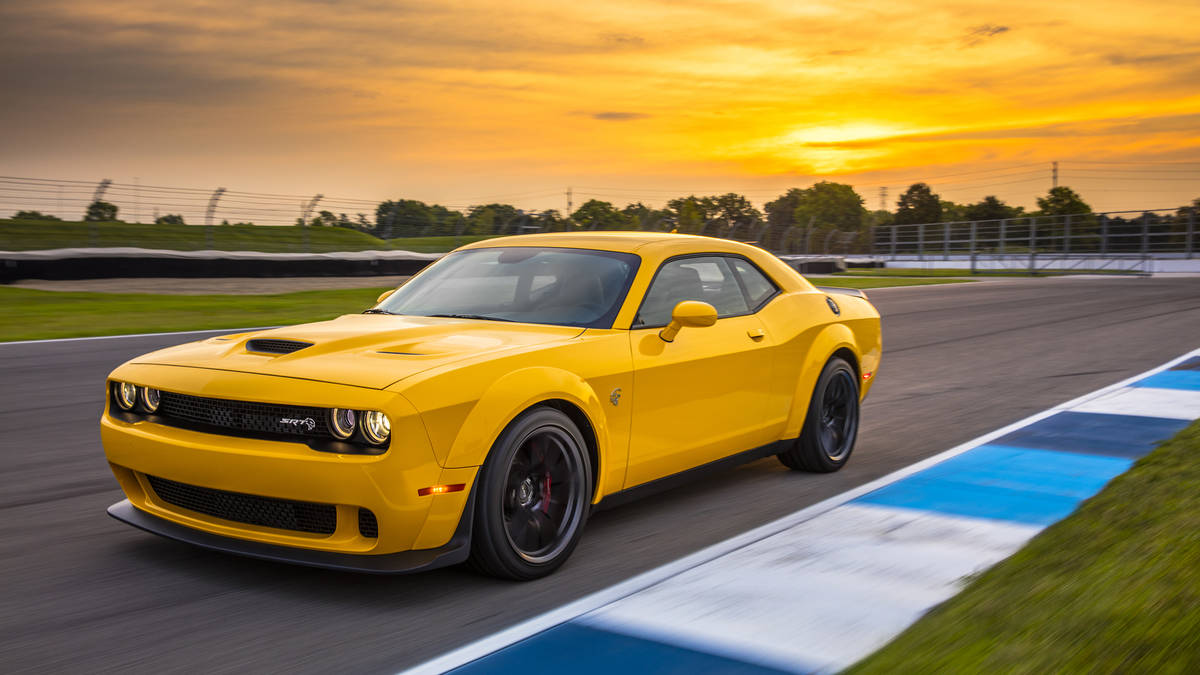 Named after the iconic WWII Grumman F6F fighter plane, the Dodge version drove up before me in the parking lot of the Monticello Motor Club producing as much anticipation as I might imagine getting if the real “ace-maker” fighter had appeared.  Although I’ve not yet flown a 2,000 hp F6F, I was about to drive the Dodge Hellcat at speed and the tingle of anticipation at stomping on the 707 hp supercharged hemi V-8 was no less overwhelming. 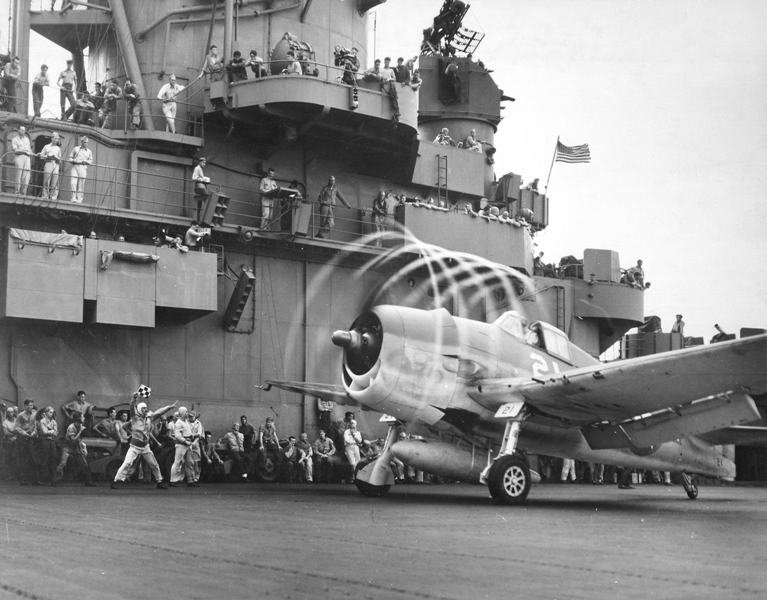 The Dodge professional driving coach that escorts press reviewers such as I, nodded with approval as he opened the driver’s doors and pointed out the features.  This model was a fly-yellow, eight-speed automatic (front engine, rear drive) growler, with flared fenders, wide wheels and tires.  An incongruously comfortable interior that combined Dodge nostalgia with post-millennial technology allowed me to concentrate on the driving which was challenging enough.

The primary word of caution was not to stomp.  Aw.  Stomping, I was told, would certainly produce a dense cloud of white smoke and lots of noise, but the car would tend to madly fishtail in a way that only an experienced driver with lots of hours behind this beast could control.  I took the coach’s word for it, and didn’t suffer loss of face or fun.

Easing into Monticello’s track I slowly built up confidence and speed, entering the Carousel and proceeding through a long, sweeping upshift arc that topped out at about 85 before the chicanes required heavy breaking that was immediate, straight and effective.

For this event, the long straightaway was broken up by “bus stops” and barriers that forced the drivers to maintain a sane speed while testing fast, camber-changing twists and abrupt applications of brakes and accelerator.  I will say that the Hellcat tended to whip her wicked tail a bit, but not in a way that interfered with the task at hand.  This is a big ship that is not at all like a nimble Porsche or Mazda sports cars that were also available that day.  The Hellcat is a big, bruisin’ American muscle car and if you live in a typical suburban neighborhood, your neighbors are encouraged to keep their distance.

The next Monticello challenge was a slightly rising and turning length of road that was obviously designed to distract you from the fact that you were eventually going to hit a crest where the car would suddenly go a bit light in the loafers. And to add to the thrills, the track’s designer threw in a turn at the bottom of the resulting crest so that if you didn’t mind your manners, you’re likely to be looking back the way you came.

Our Hellcat takes the rise well, as the SRT’s 707-hp supercharged Hemi V-8 tends to resist flight in the vertical direction.  The 2018’s wider 20-inch wheels, automatic 8-speed transmission and an electrically assisted power-steering system, all great items to have on a dragstrip, adapt well to the sportscar friendly Monticello twisties and we’re aimed straight for the final challenge.

This is a hairpin turn that demands hard breaking and shifting down to first or you go away mowing Catskills grass.  The test driver is wise to carefully line the car up with the uphill quarter-mile final straight and then to EASE into the accelerator until the floor is felt about 100 feet into the run.  The Dodge representative, riding shotgun is quick to gesture a full braking, but I’m already there.

Having tooled this turn earlier in a Jaguar F-Type RS, when I failed to follow instructions I bit off bit some roadside ferns and resolved to do better next time.  Just after that shameful performance another heavy stomper who did not follow directions went off fishtailing all across the pavement, panic stopping and engine restarting to take a lesson well purchased in the precious coin of embarrassment.

Heading into the hairpin at modest speed, the Hellcat’s brakes respond vengefully with deceleration that wants to peel my face off.  Now I’m well pointed to stomp the Hellcat’s full power from a near standing start.

I followed the instructor’s admonition, came almost to a full stop and as soon as I knew my tires were making sticky with the pavement, down went the hammer.  One must not yield to the desire to look at the speedometer at the same time as the quickly approaching turn barrier, but with each car driven that day, but a little birdie told me I hit 110.  Not so shabby on a course that was purposely designed for that day’s conservative press attendees. 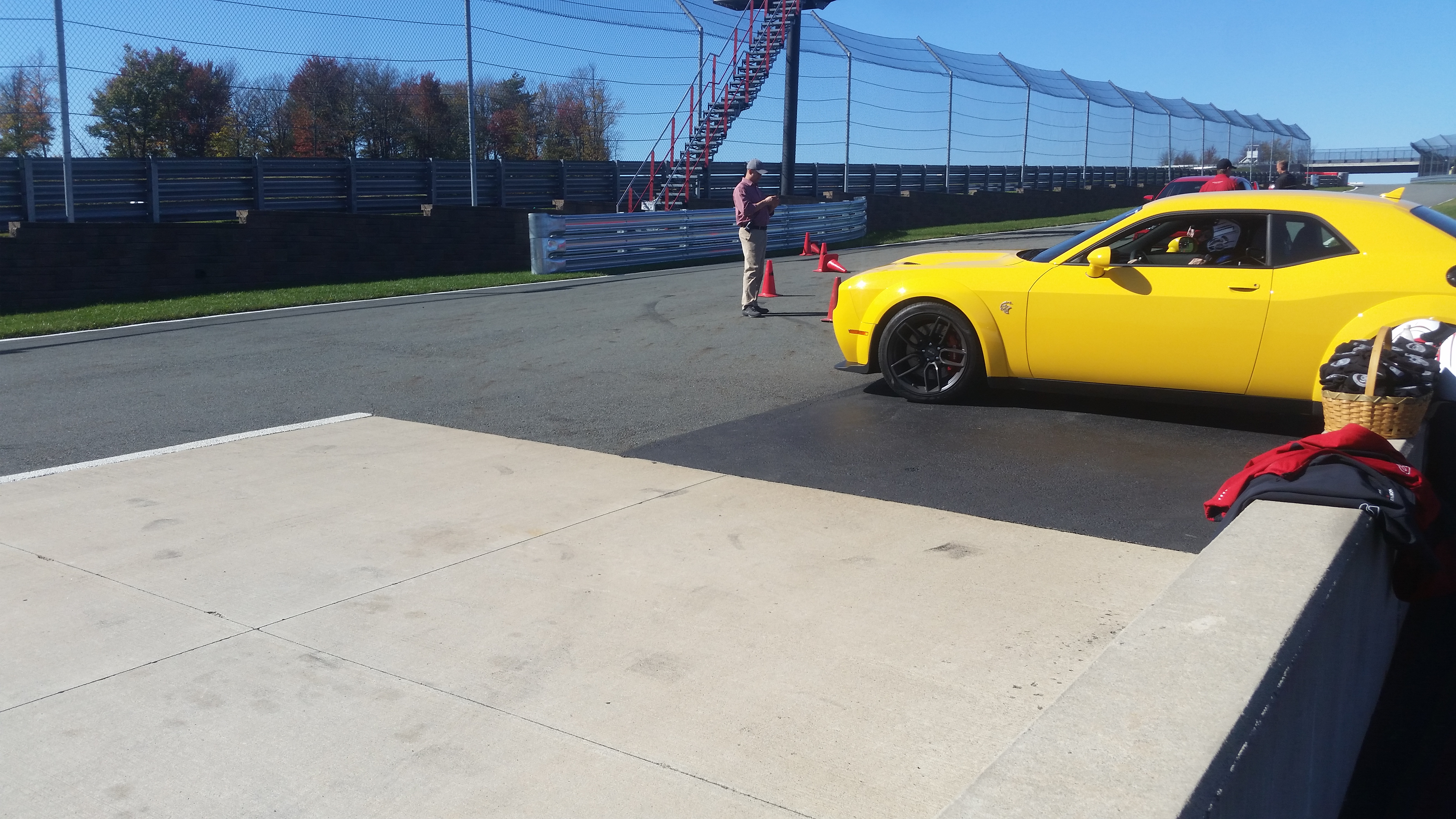 My impression of the Hellcat?  Some have said that the model, which was Thor’s Hammer in 2015 had little to offer three years later.  I do not agree.  Significant improvements in both speed, interior comforts (“Hello, Ladies.”), and suspension seem to keep this hot number clawing the cage of desirability in this writer’s heart.

Take one for a test drive.